<![CDATA[ <h1]]&gt; By: Adam benShea <img src="https://gallery.mailchimp.com/3a38161043764354f6052d5cf/images/0935832f-cef8-45b1-91b9-661da4c1f1f4.jpg" width="293" height="436" data-file-id="879581" data-cke-saved-src="https://gallery.mailchimp.com/3a38161043764354f6052d5cf/images/0935832f-cef8-45b1-91b9-661da4c1f1f4.jpg" class="no-lazyload" /> Doug Furnas Born on December 11, 1959, Doug Furnas is the physical cultural legend you may have never heard of.  A pro wrestler and powerlifter, Furnas wrestled in the WWF, WCW, ECW, and the All Japan Pro Wrestling circuit while also setting multiple world records in the 275 pound weight class. Like any true physical culturist, Furnas’ skillset extended beyond just one specialty.  Although he is best known for his powerlifting and pro wrestling accomplishments, Furnas excelled initially in high school and junior college football, even making it to the Denver Broncos training camp.  It’s also rumored that Doug was a competitive bull rider. From football, Doug transitioned into powerlifting, first in the 242 pound class, before bulking up to the 275 pound division.  Known as one of the greatest squat technicians in powerlifting history, Furnas was the third man to total 2400 pounds and the first man to do it at two separate meets.  The first time he reached this feat was at the inaugural APF World Championships, held in 1986 on Maui, Hawaii.  In an old squat suit, he squatted 986 lbs, wearing a loose bench shirt, he benched 600 lbs, and he pulled 814 lbs in the deadlift.  Sixth months later, at the APF National Championships in Minnesota, he totaled 2403 lbs. 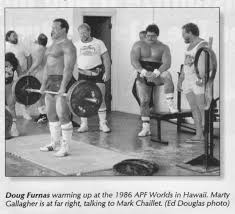 Before making the shift from powerlifting to pro wrestling, Furnas set 29 powerlifting world records.  Like many wrestlers, Doug made his debut on the independent circuit before making it to the big show.  He worked for a brief stint in the WCW as a member of Sting’s “Dudes with Attitudes” in 1990, which feuded with Ric Flair’s notorious Four Horseman.  As a tag team partner with Dan Kroffat, he participated in what Wrestling Observer Newsletter called the “Match of the Year” in 1992.  Later Furnas wrestled in the WWF’s Survivor Series in 1996.  Alongside ring legends like “Flying” Brian Pillman and Rocky Johnson, he is often remembered as having one of the best drop kicks in pro wrestling. In retirement, Doug showed that his heart was as big as his powerlifting totals.  He ran a group home for abused boys in San Diego.  He also raised rodeo bulls on his family farm. 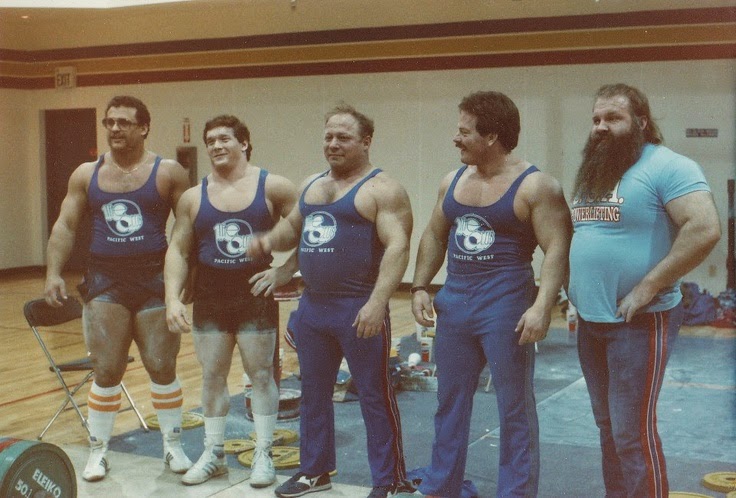 Furnas would only train twice a week.  On Sunday he would bench press and also do close grip and wide grip variations.  On Wednesday, he would squat and deadlift. Before a contest, he would complete a 14 week training phase starting with ten reps on the bench, then adding weight and dropping reps to sets of 8, 5, 3, and eventually 2. With squat, he would never go higher than 5 reps and would often do sets of 5 or 3. According to an interview with Furnas in 1988, he did no negatives or forced reps.

Don’t say it, live it! People ask: How did you go from Donut House flabby to Jailhouse Strong?? How come you pass on pancakes but double down on steaks?? How did you get #springbreakready before most people got their ticks to Pensacola?? How come your chiseled face now looks like it should be in a billboard for a cologne scented with pine and clear mountain streams?? Let your shirt answer the question. Fitted to accentuate all the best angles. Purchase the shirt here!]]>