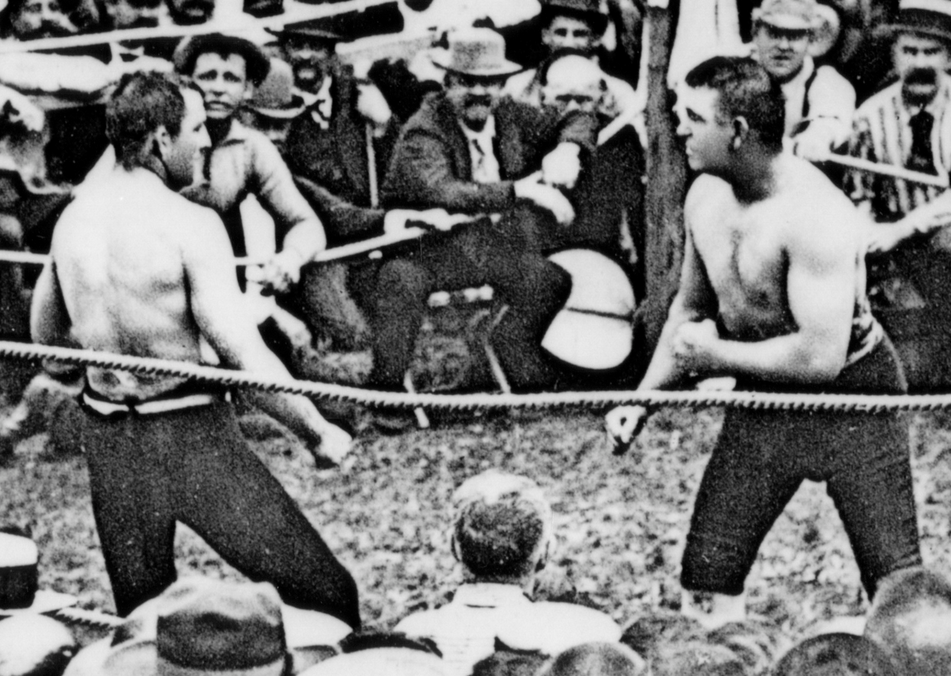 In 1995, the school of hard knocks gave me an honorary doctorate in mental toughness! My professor was a self-described half Puerto Rican/ half Okie, named Gilbert.  Gilbert trained daily at the same boxing club where my best friend, Adam benShea, and I trained. Gilbert would disappear for weeks at a time to “work construction in Fresno.” We later learned this “construction” was making license plates in county.

The Day of Reckoning The Elks Club in Santa Barbara, California was hosting a fundraiser for our boxing club. Gilbert, the convict way past his prime, was fighting a golden gloves champion of Southern California named Israel. This fight was a set up to run Gilbert out of the club, maybe even out of town. This over-the-hill, 40-something year old bum would get his head taken off, he’d get out for good. Gilbert didn’t believe that for one second. He openly vowed to the entire club he was going to whip the younger boxer. Everyone just scoffed at him, especially Israel. One day as Adam and I were leaving the club, Gilbert was out front smoking his signature unfiltered Camel and told us that Israel “was talking pretty big for a one-eyed fat man.” Besides the amazing display of cultural literacy quoting The Lost Treasure of Sierra Blanca, Gilbert’s eyes irradiated belief and the definitive purpose of victory. As the fight approached, Gilbert spoke words of victory. On the other hand, the favored-Pug, would “talk crap” but his cockiness seemed more like a disguise of insecurities. Fight day approached, it was a perfect setting. The Mariachi Band was playing. The tri-tip was cooking and the old time veteranos had the cerveza flowing and someone probably even had a couple shots of tequila. Gilbert knocked out Israel in the 2nd round. No judges involved! Moral of the story: Gilbert believed and achieved. Now, before you think this story has gotten a little bit bizarre, stay with me. Why are expressions like “the game is 90% mental” or “the game is ¾ mental and ¼ physical” common? Let’s just say the inverse is true and the game is only 10% mental, how many athletes are spending 10% of the time preparing mentally? There is also a lesson to be learned from Israel, you can’t win with both hands around the neck.  Israel choked!

Preparing for success The bottom line is: when preparing your mind for a seven-figure business deal, powerlifting meet, football game or pugnacious battle outside the local mobile home turned redneck bar, we need to prepare the mind properly and realistically. Talking about the upcoming task could be detrimental or beneficial—depends on the talk. The more vivid your preparation, the more successful it is. That means integrating all five senses, not just what you see but even what you hear, smell, taste and touch. When your day of reckoning comes, there will be no surprises! The opposite of choking is having a killer instinct.  Since the subconscious mind only understands goals stated in the positive, let’s take a look at developing your killer instinct, not at “how not to choke.” Here are some tips to develop your killer instinct:

1.    Remove distractions. Whether they be internal like thinking unproductive thoughts, focusing on irrelevant cues or anything that compromises your mental sharpness, be done with it.  Before the big contest, stay away from the competitor that is babbling about nothing just because his nervous energy won’t allow him to keep his pie hole shut. He is experiencing a personal hell, doesn’t mean you need to join in. An internal conflict is you trying to psych yourself out and an external conflict is your opponent trying to psych yourself out. *A way of removing distractions that has worked for me is visualizing positive past experiences, playing the experience back as a movie; this movie is vivid, up close, three dimensional, very bright and viewed on a panoramic screen. I do the same thing to visualize future events.  For negatives, a similar method can be used, just now see the movie on a small screen, black and white and fading out.  This will change your perception of what has and will happen.

2.    Believe in yourself. Be confident, not cocky. Believe in your preparation. A study in the 2009 Journal of Perceptual Motor Skills showed that athletes that believed in their training plans had much more success than athletes that did not believe in their training methods. This is not some touchy-feely, 1990s public school self-esteem jargon either. You should only train and prepare a certain way if you believe in it. If you believe in what you are doing and have the proper preparation, you are ready to roll.

3.    Operate in your effective zone not your comfort zone.  It’s amazing how many folks justify their way of doing things because they have always done things a certain way.  Being physically flaccid, mentally weak, and having pennies in their pockets with the creditors constantly calling, still believes in their way just “because.” The definition of insanity is to do the same thing over and over and expect different results.  We are moving forward or backward, stagnation is a myth.  ALL OF US can grow and learn: mentally, physically and spiritually.

4.    Know your own strengths and weaknesses. Know your opponent’s strengths and weaknesses. If you are a boxer and every time your opponent throws a jab he brings his hand down to his waist level, there is an opportunity to throw an overhand right, lights out for him! Know your weaknesses. A power-running fullback ala Larry Csonka, has no reason to juke a much smaller linebacker, simply run him over. An out of shape powerlifter may have to go a little bigger on a second attempt deadlift because he may run out of gas in his third. Keep your strengths your strengths and by knowing your weaknesses you can work to bring them up. “Know thyself,” in the words of Socrates; additionally, know your opponent.   Learn how to develop a killer instinct with this Amazon #1 Seller for only 2.99