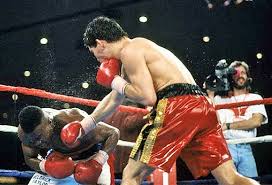 
The year was 1995, little did I know, the school of hard knocks was about to give me an honorary doctorate in the art of “flow” and my professor was Gilbert, a half Puerto Rican/ half Okie that spent half his time behind bars and the other half at the local boxing club where I trained.

The Elks Club in Santa Barbara, California was hosting a fundraiser for our boxing club. I had a fight that I was extremely excited about and ended up winning by 2nd round TKO.

I was just as excited about seeing the main event. Gilbert, the convict, way past his prime and fighting a golden gloves champion of Southern California named Israel.

The fight was basically a set up to run Gilbert out of the club and, hell, maybe even out of town. When this over-the-hill, 40-something year old bum got his block knocked off, he would be gone for good.

Gilbert didn’t believe that for one second!

He openly vowed to the entire boxing club and his favorite kick n’ stab bar “The Mecca” that he was going to “open a can of whoop ass” on the younger boxer.

And anyone that knew shit from shinola just laughed.

As the fight approached, you could see in Gilbert’s eyes that he believed he would win and spoke words of victory. When he wasn’t outside taking a smoke break or telling inappropriate jokes to 14 year olds, he was training hard.

On the other hand, Israel, the favored-pug, would talk smack but his false bravado seemed more like a blanket of disguise for his insecurities. Israel’s attitude was “Gilbert doesn’t belong in the ring with me.”

Fight day arrived, it was the perfect setting. The Mariachi Band was playing. The tri-tip was cooking, the old time veteranos had the cerveza flowing and someone might even have had a couple shots of tequila.

In beautiful display of ring generalship, Gilbert knocked out Israel in the 2nd round.

Moral of the story: Gilbert believed and achieved, got in a state called “flow” and performed his best.

During flow, without effort, you are able to give full attention to the task at hand.  Steven Kotler, an Austin, Texas-based expert on flow describes the state as “those moments of total absorption, when we’re sucked in by the task at hand that seems to either slow down or speed up.”

So if you have ever been so immersed in an activity that you lost all sense of time, you have experienced flow.    Flow is the scientific term for being in the zone and was first coined in 1975 by Dr. Mihaly Csikszentmihalyi.

Flow is not hard work through strain, described in the words of Dr. Csikszentmihalyi  when achieving flow “you don’t feel like you’re working against the current, but with it.  Work doesn’t seem like an obligation, and you get better at what you are doing.”

Flow can range from a perfect beat down in the ring to staying up all night writing an opera to speaking in tongues at Pentecostal tent rival.  All these things require total submersion and complete focus on the present moment.

Great musicians, artists, athletes and pretty much anybody successful experiences flow.   Sure, some folks do fine by working hard against the grain but they never achieve  their full potential and eventually tire out.

Flow sounds great, right?  Instead of keeping this some Ivory Tower of academia theory, let’s take a look at four action taking steps you can take to experience flow in greater frequency and duration.

Challenge Yourself (Within Reason)

A challenge that is on par with your current skillset or slightly above it is most likely to bring out your best. If you can’t sell used cars at a lot that doesn’t require a credit check, you probably aren’t ready to sell real estate as a realistic challenge in Beverly Hills.

Conversed, if a powerlifter is well prepared for a 600 third attempt deadlift  but needs to pull 622 to win the meet—by golly he has a good shot.

If you are a state-level golden gloves boxer, start sparring with national level boxers; challenge yourself just above your skillset repeatedly and, before you know it, success becomes a foregone conclusion.


Engage in the Present

When I am writing or making clients’ programs on my computer—I leave my phone out of my office simply because I need to be my best; I must be engaged in the present and not worrying about my latest text message or Instagram posts.

Learning to do this can be achieved with intense physical training.  If you are squatting heavy, sparring or running intense intervals—do you think you are going to be focused on the latest Hollywood Gossip? If you are training with true intensity, you must be present, plain and simple.

Engage fully in what you are doing, don’t just look at the end game—the end game will be bitter and less fruitful if you are not engaged in the present along the way.

Socrates said, “No man has the right to be an amateur in the matter of physical training. It is a shame for a man to grow old without seeing the beauty and strength of which his body is capable.”  I think he was talking far beyond physical conditioning.

Man is a goal-seeking being!

This is innate and he was designed that way by his creator.

Wanting to lose weight is not a goal—losing 25 pounds is or 8% measured by a DEXA scan within four months is.

Don’t trick yourself into believing you are going to one day write a book, ride bulls or bench 400 without deadlines; a goal is simply a dream with a deadline.  Set real goals with real deadlines.

After your goal is set, make a public declaration, the chance of success is much higher.  After all, unless you are a known ne’er-do-well, who wants to constantly make public declarations and not follow through?

Vladimir Lenin was a terrible person but the reason he succeeded in establishing communism in the USSR was Lenin knew his time was short.  Doctors told him very early on he would die young, so he used his short time on earth to maximally promote his agenda.

Many jobs and activities have built-in immediate feedback systems: the bodybuilder feels a great pump while training and the penile enlargement surgeon that accidentally short changes a patient immediately realizes this little mistake.

With sales, writing and advertising, the feedback is not always immediate.  The salesman may not sell anything today but may have made 15 new contacts via a networking event, is that a failure?  Absolutely not! The sales man can objectively set goals at these types of events to make five new contacts and speak to five people about the product, something tangible and quantitative.

A writer may not see the end product but can make a goal to write two pages.

When feedback is not immediate, some helpful tools to make it that way are:
•    Impose Deadlines- I often work with a timer on!  Make deadlines for yourself, such as contact three new leads by 1 PM. (Lenin example)
•    Make to-do lists- Be specific; starting an article is not specific, finishing three paragraphs is.  Eating better is not specific, have 12 ounces of lean meat by 1 PM is.
•    Regular Check-ins– If you do not have a mentor or coach, find someone to partner with and offer each other feedback on your work, be it writing or evaluating a workout protocol or technique.
Honest feedback drastically reduces the chance of failure!

Gilbert did not win that fight from cutting from two packs to a pack of Camel Unfiltered cigarettes daily. When Gilbert was in that ring, he lost all sense of time and watching him beat down Israel was like watching poetry in motion.

“Flow” is the optimal state, where you get the most done, this just the tip of the iceberg but these strategies have been very helpful in helping me achieve a state of flow.

Get the mind right HERE.