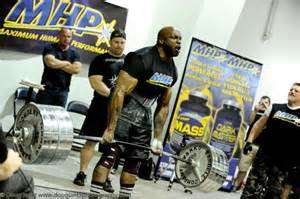 “Weakness is a crime,” was the gym slogan when I trained at Paul Leonard’s Yorba Linda Barbell Club in the early 2000s.

Did you know that, recently, researchers from the Winston-Salem State University in North Carolina found that men and women under 30 have weaker grip strength than they did back in 1985? Their work was published in the Journal of Hand Therapy.

Excluding high-level strength athletes, as this study shows, people are getting weaker.  Don’t become guilty of this crime, use the following five exercises to build world-class strength.

“Experience without theory is blind, but theory without experience is mere intellectual play.”
-Immanuel Kant

I have used these exercises with some of strongest athletes in the world and I assure you all are theoretically sound and battle-proven in the real world of results.

The bench press has an ascending strength curve, meaning it’s hardest at the bottom of the movement and easier as you push the weight up toward lockout.  In a powerlifting meet, this is amplified because lifters are required to momentarily pause the barbell on their chest and wait for the referee’s single to press the weight.

Benefits: The dead bench press directly exposes and works the bottom weak point because the negative portion of the press is eliminated!  You are forced to push the weight from a dead stop, contrasted to being helped by elastic-like energy that is stored on the negative portion of the lift. Because of this, you build tremendous power out of the bottom where you are weakest.  Moreover, this movement builds starting strength and rate of force development (RFD), qualities that transfer to the field of play in traditional sports or fisticuff fury when pumping gas at the Chickasaw travel plaza. With no eccentric, you are able to build strength without adding muscle mass, very important for athletes that must remain within a weight class and/or need to maximize speed and explosive power.

Bonus Tip: Never perform this movement for more than a single repetition because then the stretch reflex is introduced and the whole point of this exercise is to eliminate it.

Exercise: Dead Squat
Like the bench press, the weakest position in a squat is the bottom.

Benefits
Even though the squat has an ascending strength curve, many lifters come up a couple inches out of the hole in a squat before getting stuck.  This begs the question, why? Because the elastic-like energy stored on the negative portion of the lift, i.e. the stretch reflex, drove them out of the bottom.

With dead squats you have to get the weight moving all by yourself, developing greater starting strength and activating more motor units.  Basically, you are building strength in a position that will help eliminate the limiting factor (the point where the elastic energy stops assisting).

Dead squats offer transference to the deadlift, particularly the sumo variation and trap bar deadlift, and offer some carry to the conventional deadlift.  Think about it, you are moving dead weight like the deadlift using many of the same muscles.

Bonus Tip
If you are training to specifically  increase your sumo deadlift  perform the movement with your sumo stance using the same hip angle, knee angle and foot placement as when you sumo deadlift.

Sticking Point Specific Isometrics
Sticking points happen because of a decreasing ability to produce force in a specific range of motion.  This can be directly attacked with sticking point-specific isometrics.

Benefits
Isometrics performed properly have a very localized training effect; therefore the establishment rejects them and why they are embraced by many of my world-record setting clients and myself.

You are going to get inside of a power rack and push or pull the barbell as hard as you can for five to six seconds against the pins.  Performing isometrics in this manner will strengthen the range of motion within 15 degrees of the joint angle you are training, this localized effect the establishment deplores, is also deplored by your sticking points because it systematically decimates them.

By pushing as hard as you can in a weak region, you are overloading that region and your CNS is being programmed to become aggressive in that region.  That is why this method is superior to static holds. You can also produce approximately 15 percent more force isometrically than you can concentrically—this maximum force can also be maintained for a hell of a longer by some estimates as much 15 times longer.

Tips
Isometrics can successfully be used to bring up a sticking point in any movement, the biggest carry over my athletes and myself have experienced thus far are with bench presses, overhead press and deadlifts, but in theory they will work for any lift, even ones like biceps curls.

Begin by lifting the barbell to the pins in the power rack set at the specific region you want to target. Push or pull as hard as you can against the pins for five seconds Visualize yourself lifting the power rack off the floor, ripping the bolts out.

After this is complete, wait two to three minutes, and perform the full range of motion version of the exercise you are training with a set of 60 to 80 percent of your one-repetition max for one to three reps, with intention of moving the barbell as fast possible. This insures transference to the movement you are training and you will be more explosive with full range of motion sets because of post-activation potentiation or the PAP effect, which in the words of the late Yuri Verkhoshansky, “is like lifting a half of can of water when you think it’s full.”

Perform these isometrics for up to three sets per sticking point and no more six sets total per workout.

Bonus Tip
Do not use isometrics for more than 6 to 8 weeks at a time, their effectiveness will wear off.

Farmer’s Walk
Anything that requires explosive power, athleticism, grip strength, overall limit strength and core strength will benefit from the farmer’s walk.  So, pop the bosu ball and I’ll introduce you to some real functional training.

Benefits
The farmer’s walk involves walking while holding weights at your side. As technique is mastered, the objective is no longer to walk but to move as fast as possible.

Pundits classify farmer’s walks as a grip test. While grip at the high level for the symmetrical, well-trained athlete will be the limiting factor, farmer’s walks do, in fact, build the entire body.

I have yet to meet someone great at the farmer’s walk that did not have an intimidating set of traps that would scare would-be attackers at the gas station at 3 AM and attract the kind of women your mother warned you about. Furthermore, core stability, leg strength, calf strength and the strength of the entire posterior chain (back side of the body) are worked by training farmer’s walk.  Nothing is more functional than picking up heavy stuff and having to move with it.

In strongman competitions and training centers, specialized farmer’s walk implements are used. No access to handles, no problem! Grab a pair of weighted barbells or even dumbbells will work.

Go to an area with plenty of open space, set the implements parallel to one another on the floor. The handles should be approximately shoulder width apart so you are able to stand in between them.

Reach down and grab each handle and stand back up with the implements at your side.  Begin to walk forward with short, quick steps; as you are comfortable with the weight you can begin to move faster and lengthen steps.  Do this for the desired distance.

A good starting point with farmer’s walks is three to four sets of 50 to 100 feet.  If you have never done these before a good starting point is 60 percent of your deadlift max.  Meaning if you can deadlift 300 pounds, you would start with 180 pounds or 90 pounds in each hand.  Once you get the hang of the movement, you will be able to rapidly progress.

For a periodized strongman program and encyclopedia, click HERE.

Bonus Tip
This is a strength article but I know some of our readers want to grow huge traps; if this is your objective perform farmer’s walks for 50 feet, at the end complete shrugs with the implements without dropping them for 15 reps. If grip is the limiting factor, wear straps—the objective is growth.

The Yoke
The squat and deadlift are tough to beat when it comes to head to toe muscle fiber recruitment, but the yoke is in a class by itself.

Benefits
Once you get the hang of the yoke you will be using a lot more weight than you can squat.  Because of the fact you are putting your body under a much heavier load that it is accustomed and then taking it on a stroll, you are going to invoke a stimulus that is literally impossible to duplicate in any other way.

The yoke will simultaneously build limit strength, strength endurance, core stability and explosive power while working virtually every muscle in the body. Not to mention make heavy squats feel a whole lot lighter!

Set the cross bar to the appropriate height, at approximately a quarter squat, eventually you may like it higher but this is a good starting point.  Experiment with different hand placements and find one that allows you to get tight and build a shelf with your upper back for the yoke to rest on.

Like squatting, get under the bar, take in big air like you would for squatting,  getting as tight as possible and pick the yoke up.  Once you are standing up, let the weight settle before stepping forward.  Then, taking small, quick steps, walk as fast as you can for the desired distance, 30 feet for two to three sets is a great starting point.   Maintain tightness not only for safety but any side to side or up and down movement makes the yoke swing, which in the best case scenario slows you down, in the worst case causes injury. Take small breaths as you go, large ones will cause you to loose tightness and stability.

Ditch the latest Instagram highlight reel that makes you physically flaccid and mentally numb!  Give these proven, results-driven exercises a place in your repertoire.

Get certified by Josh as a Tactical Conditioning Specialist HERE.